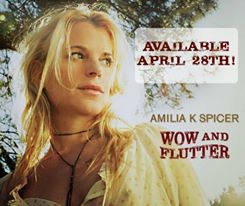 Amilia's voice is like an Angel calling down to you, and singing for you. Her voice is so powerful, yet so soft. I like the sound she is producing with her voice, and the guitar is alright. There are quite a few songs which sound the same, but its not too bad. I enjoyed it for the first half of the cd, but it became tiresome when the tracks started blending in, and becoming very similar to one another. Its written well, just think she should change the instrumentation around a bit. Check out tracks 6, 10 , and 3 for a couple of my favorites.