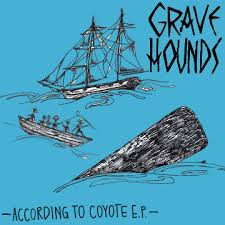 Hailing from Kalamazoo, local band Grave Hounds are fully participating in punk rock traditions in their EP “According to Coyote”. The production of the album unfortunately kept the vocals muffled and overpowered by repetitive instrumentation. However, the vocals are undeniably intriguing especially in the track “Malicious Stomp” making for one of the most interesting songs on EP.

The tone of the album makes a shift once “Old Lights” begins to play. The guitar introduction is blatantly different than the other songs and once the vocals join in their sound is captivating. The only downside is that this is the shortest track. It left me wanting more. Fans of The Strokes, Interpol, and even Lou Reed can find a sound in this EP that appeals to them.