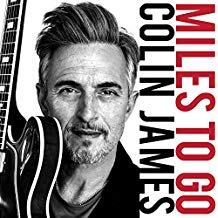 Nineteen albums into his storied career, Canadian bluesman Colin James revisits his roots with nine covers of tunes that inspired him as well as a couple of originals. Even though the tunes pay homage to their roots James isn’t necessarily bound by them. Indeed, songs like Muddy Waters’ "One More Mile" and Blind Willie Johnson’s "Soul of a Man" get a makeover with an upbeat, horn-driven treatment on the former and an energetic gospel style reading of the later. (James reprises "One More Mile" in an acoustic version at the end of the disc which hews closer to the original). Geoff Muldaur’s "Tears Came Rolling Down" is recast from its acoustic roots into a tough rocker. Elsewhere, he captures the raw essence of the originals as on Muddy Waters’ "Still a Fool", which features razor sharp guitar riffs and guttural vocals, Howlin’ Wolf’s "Ooh Baby Hold Me", which retains that tune’s stuttering guitar riff, Big Arthur Crudup’s "Dig Myself A Hole" featuring an ominous threat to the woman who dares to think she’s leaving and Jessie Mae Robinson’s oft-covered," Black Night", which wallows in its loneliness and deep sense of despair. His original "I Will Remain" has a silky smooth Boz Scaggs soul blues feel while his "40 Light Years" channels rocker Chris Isaak with its slick sheen and sinewy groove. James’ confidence as a guitarist is revealed by his tasteful restraint on tunes like "I Need Your Love So Bad" where he could fill the space with dozens of notes but, instead, picks just a few well-placed ones to move the song along. Overall, a fine disc that breathes new life into these relatively well-worn tunes. SMITTY