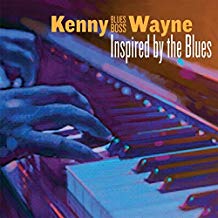 INSPIRED BY THE BLUES

While he was raised in Los Angeles, San Francisco and New Orleans, piano player Kenny “Blues Boss” Wayne is not easily slotted as a West Coast or Crescent City bluesman. Instead, he lands more naturally in places like Chicago, Mississippi, Memphis or Kansas City with harmonica fueled shuffles, "I Knew I’d Be Playing the Blues" and "That Girl Needs Help", upbeat piano and horn laden rockers, "Start Rockin’" and "Jimmy and Johnny", southern soul," How ‘Bout That", fleet-fingered piano boogie, "Lake Country Boogie" and jump blues that wouldn’t be out of place on a Roomful of Blues disc, "An Old Brick Wall". That said, he does feel the tug of New Orleans with his homage to Fats Domino," Mr. Blueberry Hill". On the live Ray Charles cut, "Georgia on My Mind", he ditches the fast-paced keyboard work of many of the other cuts and focuses instead on a heartfelt vocal performance of that classic. Known primarily for his prowess on piano (he’s a member of the Boogie Woogie Hall of Fame amongst other honors) he’s also a witty lyricist as he extols the virtues of a woman who meets his standards including not talking when she chews her food," I Like That Woman", expresses his confusion about his standing with his woman," Make Up Your Mind", and how his conversations with her lead him nowhere, "An Old Brick Wal"l. Joined here by an all-star cast including Russell Jackson on bass, Joey DiMarco on drums, Yuji Ihara and Duke Robillard on guitar, Dave Babcock on sax, Bob Tldesley on trumpet and Billy Branch on harmonica, he has all the instrumental fire-power he needs to lay down the diverse material included here. SMITTY