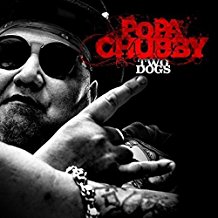 Ted Horowitz a/k/a Popa Chubby is a triple threat performer who not only plays a kicking guitar but sings and writes solid tunes. This new release finds him applying his considerable talents to tales about the need to held back from a fledgling relationship, "Rescue Me", the drag of the physical ailments that accumulate over time but may not be covered by insurance if certain politicians get their way, "Preexisting Conditions", the fact that everyone has a good side and a bad side with the winning side being the one you nurture, "Two Dogs", the fate that awaits a lying mate who talks fiction when Popa has established the facts through his sleuthing, "Shakedown", and the need to stand firm in the face of power, "Me Won’t Back Down". While Popa certainly knows his way around the blues and blues rock, "Sam Lay’s Pistol", "Chubby’s Boogie" and "Dirty Old Blues", he has a broader palate than that." Wound Up Getting High" is a ballad that could easily find its way onto a Peter Wolf disc with its wistful lyrics and sense of regret and the instrumental "Cayophus Dupree" echos Santana with its ringing tone and smooth solos. The two live bonus tracks are worthy of note as well with his version of the Stone’s "Sympathy for the Devil" given new power with a faster beat and a rollicking piano solo before Popa chimes in with a smoking guitar solo and Leonard Cohen’s "Hallelujah" given a straight, almost tender, reading that is all the more powerful in the face of Popa’s tough as nails image. Add Two Dogs to the list of great Popa Chubby discs. Smitty