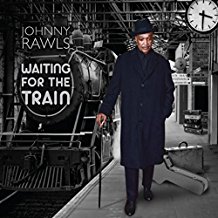 WAITING FOR THE TRAIN

Johnny Rawls has a silky- smooth voice that he has employed in the service of his own tunes and as a background singer for the likes of Z.Z. Hill, Joe Tex, O.V. Wright and a host of others. On this follow up to his chart-topping Tiger In a Cage, Rawls explores his last ride to glory on the moody "Waiting for the Train", his joy at a new love on the Bobby Womack penned "I’m in Love", the hypocrisy of the fun-time crowd in Vegas who praise God for their success at the table but damn him for the rolls that go bad," Las Vegas", and the amorous neighbors who move their bed with the fury of an earthquake on the funky, horn-driven, "California Shake". He also lays down a cautionary tale about the perils of playing things a bit too cute, "Blackjack Was a Gambler" and even works his way through Dylan’s oft-covered "I Shall Be Released", which he imbues with a solid gospel feel compliments of the sympathetic background vocals of Janelle Thompson and Shakara Weston. Those that have Rawls slotted into the soul-blues category will be rewarded with his great readings of the Tyrone Davis classic, "Turning Point", and Syl Johnson’s "We Did It". He also reveals a rocker’s heart on "Rain Keep Falling (‘Til I’m Free)" which could fit comfortably on a Huey Lewis disc. Throughout, his all-star band provides solid support as he swoops and glides over the big horn charts and tasteful guitar licks. Don’t miss this train.