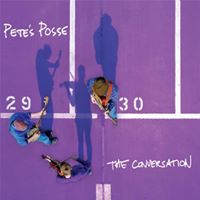 This album is pretty unique and not something I could even relate an artist too. They have a folky feel for sure, but with the different harmonies involved its hard to pin them down to one Genre. On some songs they sound like the Beatles, and then other songs are more Irish Fiddle sounding. The one thing i really liked about this album is that each person in the band plays several different instruments and they utilize that talent to its fullest potential on several songs with a tremendous amount of versatility. Songs 2, 4, 6, and 11 were a few good ones to cue up.