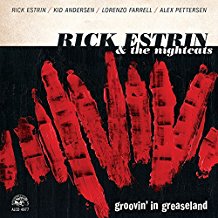 Starting things off with a rich harmonica groove, Rick Estrin & the Nightcats (now consisting of Estrin on vocals and harmonica, Kid Andersen on guitar, Lorenzo Farrell on keys and Alex Pettersen on drums) rip their way into their new disc with the sharp-eyed observation that “as long as the world ain’t fair the blues ain’t going nowhere.” They then proceed on the same track to give a handy primer on all the times in your life the blues come to the rescue- Bad luck. Check. Bad romance. Check. Money troubles. Check. Crooked politicians and bad preachers. Check. Then, to drive the point home, Estrin, Andersen and Farrell trade hot solos that wash all the day’s troubles aside. And that is all on just the first track! From there the band looks at living without respect," Dissed Again", explores the perils of opening your heart to the scoundrels and charlatans of the world, "Tender Hearted", reflects on the bad mistakes and choices that have lead up to "Another Lonesome Day", relishes the toll the ravages of time will take on a woman who pretended to be a lover but was only a user, "Hands of Time", laments about the drag of barely making ends meet, "Living Hand to Mouth", and delves more deeply into lost love, "Looking For a Woman", where Estrin comically tries to pass off heartbreak by noting it is no big deal because he was looking for a woman when he found the one that just ditched him. As is usually the case with Estrin, a good number of the lyrics take on sober subjects with snarky, wise-guy wit. While Estrin takes the front of the stage as vocalist and is a fine harmonica player, the contributions of the rest of the band are critical to the overall feel of the disc. Kid Andersen has no fear as a guitar player and is comfortable with everything from the jump blues of "Hot In Here" to a smoking tribute to Lonnie Mack on the over-the-top instrumental "MWAH!" Meanwhile, drummer Alex Pettersen holds the wild proceedings together and Lorenzo Farrell simply smokes on a variety of keyboards evoking memories of greasy organ grinders like Ron Levy or Dr. Lonnie Smith on "Cool Slaw". Modern blues at its best. Smitty