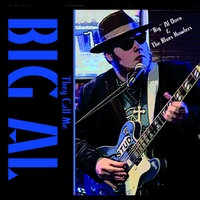 They Call Me Big Al

I love the blues, what else can i say. When it comes down to Genre selection its hard between blues and jazz for me, and in this case it would be blues all the way!!!! They have a fairly traditional blues style like several greats including Buddy Guy, Elmore James, and the list could go on. I thought it was recorded pretty well, and was very easy to get into each song and the groove. My favorite songs were 2, 4, and 6.