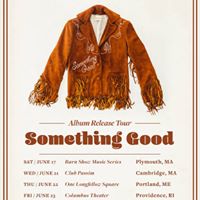 Dan Mills has quite the story. He was recently chosen to play the role of Carl Perkins in the Broadway production of Million Dollar Quartet. He has strong influences from the vintage days at Sun Records, which has really helped aid in his songwriting. This also helped him transfer some of the music to his guitar playing and eventually to the new album. Singer Songwriter to say the least. Check out tracks 4 and 5 for a couple good tunes on this one.