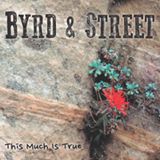 This Much Is True

One of my favorite labels with regards to music is Stax Records. They have produced so many good artists over the years. With this being said Tommy Byrd was with Stax Records before he decided to go out on his own. A well known songwriter to say the least, he has written some good tunes over the years, including the "Song Of Austin." which one several awards. This album is a direct reflection of that Talent being put to good use. It is very folky and gives you the Americana feel you are looking for as well. I really love the song "Shenandoah" which touched my heart as i used to live down that way. Really enjoyed tracks 1, 4, 6, and 9 the most.