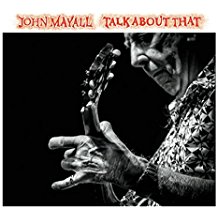 This new release by the legendary John Mayall finds his long- time touring band (Rocky Athas on guitar, Gregy Azab on bass and Jay Davenport on drums) joined by Ron Dziubla on saxes, Mark Pender on trumpet and Mick Lane on trombone. Coupled with Mayall’s own work on guitar, keys, harmonica and vocals, this crew lays down a solid back-drop to Mayall’s musings about his continued status as an object of women’s affections, "Talk About Tha"t, the fact that the landing is always harder than the launch,"It’s Hard Going Up", the need to change locations to get a woman off his mind," Goin’ Away Baby", which features plenty of Mayall’s solid harmonica work, his regrets over a relationship left behind,"I Didn’t Mean To Hurt You", where his keyboard work recalls Ray Manzarek of the Doors, and his quest to find his way into a lady’s good graces,"Don’t Deny Me While much of the bill of fare here is pretty traditional blues, Mayall does spice things up with an homage to New Orleans, "Gimme Some Of That Gumbo", which has a funky, second-line feel to it compliments of the horn section. "Across the County Line" is a horn-driven rave-up that recalls the Blues Brothers with its high-energy grooves. Guest Joe Walsh adds some soaring guitar work to "The Devil Must Be Laughing" and "Cards on the Table". While most guitarists would tend to overplay given the chance to fill the guitar slot held down by the likes of Eric Clapton, Peter Green and Mick Taylor, Walsh keeps it simple and clean with a tone so fat that Crisco should put it in a can. Mayall’s clipped, semi-spoken vocals vary little from track to track but that isn’t an issue given the varied musical back-drop that continues the solid legacy that Mayall has crafted over his many years as a recording artist and performer. Smitty