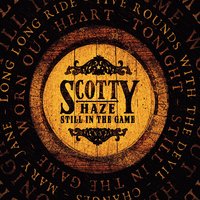 Still In The Game

Folky and Americana to point you in the right direction on this album. I thought they sounded close to The Band Of Heathens with their southern influences, and Americana Roots, which provides the Rockabilly sound i think they were looking for. They have a nice versatility in their songs, and show this by not only having original tunes of their own, but also doing a neat cover of "Don't Fade Away" and "Mary Jane." To say this album was solid, would be a bit of an understatement. Check out tracks 1, 4, 6, and 7, and add it to your library!!!