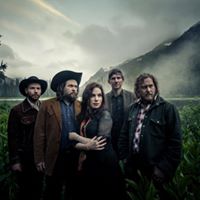 To say this is a blend of Classical Composition with Rock N Roll would be an understatement. They describe themselves as the type of band who mixes "Cinematic Lyricism" with "Seattle Barroom Honky Tonk." I would just say it has more of Country feel to it overall. It has a little bit of Americana feel to it as well. Its not too bad, hard to pin a band to which they sound similar, but pretty decent at the end of the day. I liked tracks 4, 5, and 8 the most.