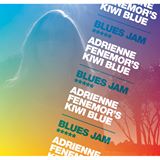 Very solid blues album. I believe the entire album is cover songs from other artists, which they take and put their own spin on them. I really liked the versions of "Got My Mojo Workin", "You Don't Know Me", and "Georgia On My Mind." They took "Got My Mojo Working" and really put a nice jazzy spin on it, which is what they do to most of the tracks. Liked it quite a bit overall, for an album which is nothing but covers.