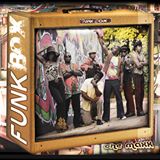 It has been a little while since i listened to something that would make you feel like you were in Detroit back in the early 70's listening to some Motown, but that is what you are getting here. Pretty Soulful and has a nice R&B feel to it as well. The girls voice just reminds you of an Aretha Franklin or something to that effect. I thought this album was pretty good overall. MY favorite tracks on the album were 1,2, and 4