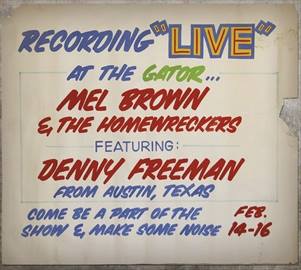 Under Yonder: Mel Brown Live At Pop The Gator 1991

Another solid album from the cagey veteran to say the least. I mean when you have someone who looks up to you and his name is Buddy Guy, i think that pretty much says it all. There are some pretty cool covers on here like "Georgia On My Mind" "I Got My Mojo Workin" and "Hey Joe." The "Georgia On My Mind" is pretty crazy as i have never really heard that other than in a piano form, nice to see someone change that up. Pretty solid overall, was very pleased.