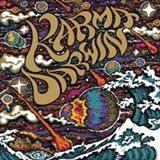 They almost sound like Umphrey's McGee in a way, or at least have that kind of feel to it. I would even venture to say that his voice is comparable as well. It was not too bad overall, i liked tracks 5, 6, and 17 the most on the album. Solid