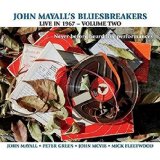 John Mayall has been part of the blues scene for over 50 years with an ever changing cast of musicians many of whom went on to be legends in their own right including Eric Clapton, Peter Green, Jack Bruce, John McVie, Mick Fleetwood, Mick Taylor, Don "Sugarcane" Harris, Harvey Mandel, Larry Taylor, Aynsley Dunbar, Hughie Flint, Jon Hiseman, Dick Heckstall-Smith, Andy Fraser, Johnny Almond, Walter Trout, Coco Montoya, Buddy Whittington and too many others to count. With Mayall on vocals, harmonica and organ, the early iterations of the band typically brewed up a stew of originals by Mayall and some well chosen covers. This edition of the band, which lasted only three months, featured Mayall and the future core of Fleetwood Mac, Peter Green, John McVie and Mick Fleetwood. Recorded by a fan on a one-track reel- to-reel tape deck at various live gigs, this disc has a raw, unpolished sound that captures the music better than Mayall’s vocals. But what music it was! All four played with unbridled enthusiasm for the blues with Green’s guitar ripping a razor sharp path through the cuts and Mayall wailing on harmonica like he was auditioning for the legends he was covering such as on Sonny Boy Williamson’s "Your Funeral And My Trial". While early in their careers the four had clearly spent time wood shedding the roots of the blues with tough covers of B. B. King’s "Sweet Little Angel", J.B. Lenoir’s "Talk To Your Daughter", T-Bone Walker’s" Stormy Monday" (where Green earns some well deserved applause from the audience for his sinewy solo) and Otis Rush’ "Double Trouble". The original cuts also fare well including Green’s guitar tour de force "Greeny" and Mayall’s chugging "Chicago Line" which gives McVie a chance to solo. Even now all these years later it is easy to understand why the fan felt compelled to capture these tunes as they were laid down live and hot before this version of the band flamed out. Smitty