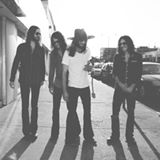 This album kicks ass!!! I really enjoyed it. They sound good, have really good musicianship and good lyrics to match up. Just really solid rock album. They give you that southern feel to their music, which makes sense since it was recorded near Muscle Shoals, AL. Tracks 6, 7, and 8 were the best on the album in my opinion.