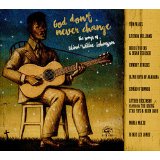 This all-star project collects 11 of Blind Willie Johnson’s classics from the 1930s and reintroduces them anew. While he recorded only 30 tunes, Johnson’s contribution to the music world is indispensible. Melding raw guitar with gospel-driven songs of salvation, Johnson did not sing the blues but, instead, sought to minister to the down and out through his powerful voice and music. The artists that are featured here bring a sense of authenticity to the project through rough and tumble versions of the songs that melt away the many years that have lapsed since they were first written and performed. Many have been covered before including "It’s Nobody’s Fault but Mine" (Led Zeppelin), "Motherless Children Have a Hard Time" (Clapton) and "John The Revelator" (more people than you can count!) but are given enthusiastic readings here by Lucinda Williams, the Blind Boys of Alabama and Tom Waits respectively. Devoid of the hard rock of the well known covers, the songs shine in an entirely new light. Williams also powers through the title cut with Doug Pettibone’s guitar adding an eerie counter-point to her raw vocals. The other artists rise to the task as well. The Cowboy Junkies step away from their typical hypnotic style and lay down a surprisingly gruff reading of "Jesus is Coming Soon". Maria McKee (Lone Justice) throws her powerful voice into a full roar on "Let Your Light Shine On" and the husband/wife duo of Derek Trucks & Susan Tedeschi add a gospel sheen to "Keep Your Lamp Trimmed and Burning". Rickie Lee Jones brings the necessary dread to" Dark was the Night- Cold Was the Ground" and Sinead O’ Connor offers a choir of vocals over a simple but powerful guitar groove on "Trouble Will Soon Be Ove"r. A solid listen from beginning to end that should remind music fans of the rightful place of Blind Willie Johnson in musical history. Smitty