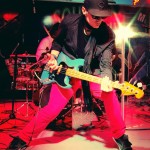 Freekbass and the Bump Assembly

Being a person who really enjoys playing bass this album stood out to me. The name is somewhat what you are going to get when you play this album. There is actually some pretty good musicianship going on. They add many more instruments to this band as the album progresses, throw in some horns, and boom you have some good tunes. It is so hard to have someone who wants to be the lead, but he knows his place and the music he is trying to produce in my opinion. I really liked tracks 1,7, and 8.