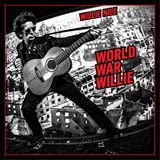 This is the 10th Studio album from Willie Nile. He has had some pretty good success in the past that is for sure. In terms of the entire discography i would classify this album somewhere in the middle in terms of the quality. In 2013 he won Best Rock Album of the Year by the Independant Music Awards. You can certainly tell that is a sensational song writer. On this album he also employed Steuart Smith from "The Eagles" and "Rosanne Cash" to help out with some guitar assistance. I didn't think it was too bad, but it could certainly be better in my mind. Tracks 2,3, and 9 i felt were the best ones on the album.