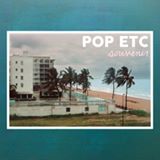 Indie Rock. I really enjoyed the guitar playing on this album, as that seemed to be what stood out the most. The album as a whole was not too bad, and my favorite tracks were 2, 4, 6, and 7. I couldn't really pin point who they sounded like, but there are some similarities there. I felt the album flowed pretty good from start to finish. I enjoyed it at the end of the day.