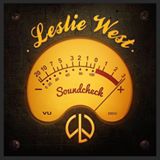 When i hear the name Leslie West i instantly think of the band Mountain, and i think there should be some good tunes to come out of it. Well this cd is certainly something different. it is mainly cover songs, but with some special guests. The sounds are good and some of the covers are not too bad, but i was hoping to hear some more of that traditional sound they put out back in the 70's. Weird to hear him sing songs like "Stand By Me" and "Give Me One Reason." Its not too bad, just a little different if you are used to hearing other stuff from him