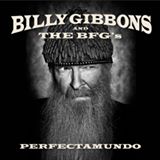 Billy Gibbons and The BFG's

So obviously when you look at this title of this band you recognize that familiar name of Billy Gibbons. What you might have not known was that Billy actually had bands before and now after ZZ Top. He played prior with a band called Moving Sidewalks, which you really need to check out if you get a chance. Perfectamundo is Billy's first solo album and he doesn't disappoint. This is more than just a power trio like we are used to. They throw in some B3 organ in there, with some fat bass lines to mix in. You will certainly recognize that Unique sound of Billy playing guitar. There are a few good tracks on the album, and all the tracks really differentiate themselves in some fashion. Tracks 1,2,3,10 and 11 were my favorites on the album.