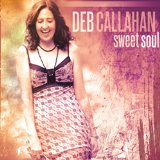 On her 5th disc, Philly singer/songwriter Deb Callahan is joined by the LA crew of producer/drummer Tony Braunagel, guitarist Johnny Lee Schell, keyboardist Mike Finnigan, bass player Reggie McBride, a host of back-up singers including Teresa James and her own long time guitarist Allen James. While the LA crew is much the same as found on the recent Albert Cummings disc the sound is much different as the players are more focused on letting Callahan’s rich vocals shine than on keeping up with the guitar pyrotechnics of that effort. That’s not to say that this is all background music: it’s most decidedly not. The band simply mixes the ingredients differently this time around. "I Keep Things Running" is a tough primal stomp while "Shackin’ Up" is a buoyant rocker about young lust hitting the wall when the rest of the family becomes part of the package and "Step Back" features a mash up of a ballad and several rocking interludes. "I Am Family" strikes a different tone both musically and lyrically with its earnest offers of help and soul pop groove. "Born to Love You" extols the virtues of the right person at home with rich backing vocals driving home the point. The big ballad "Slow As Molasses, Sweet As Honey" gives the band plenty of room to shine with multiple solos. "Seven States Away" and "Crazy ‘Bout You Baby" dip more firmly into the blues with their incessant shuffle beat. Tom Wait’s classic "Down in the Hole" gets a cool funk treatment and showcases the broad range of Callahan’s voice as she gets way down low, almost guttural, before leaping back into the higher end of the vocal scale. Dr. John’s "I Been Hoodood", features Callahan at her sassy best grinding through the band’s stuttering swamp stomp. With a rich voice and a sharp ear for the right feel, Deb Callahan has crafted a fine release. Smitty