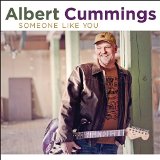 Guitarist/vocalist/songwriter Albert Cummings has it all: great guitar chops, solid vocals and a way with words. This disc features his triple attack backed by label mate Jimmy Vivino on guitar, Mike Finnigan on organ, Reggie McBride on bass, Tony Braunagel on drums and Theresa James on background vocals. With the crew assembled specifically for this project, Cummings presented them with the 12 tunes found here and they ripped their way through them. In fact, Cummings declares in the liner notes that these are all first-takes with no post recording editing. Given the quality of the players that is not entirely surprising. They are all long terms veterans of the blues. While live to tape projects tend to feature everyone playing it safe with standard chord progressions and song structures that is not the case here. The band had to be nimble and open to many different directions before the record button was pushed to “off” at the end of the sessions. "No Doubt" is a flat out blues rocker with lots of high energy guitar work, while "I Found You" has a slinky CCR vibe and "So Strong" sounds like a Gregg Allman solo cut. "Finally In Love" chugs along like a T-Rex boogie with an added kick from a tough as nails guitar solo. On this side of the Atlantic "Make Up Your Mind" recalls any number of southern rockers and "Little Bird" dials back the volume and heat for a Buddy Guy style pot boiler with plenty of delicate single note picking and notes bent to the edge of breaking. "Meatlocker" is a jazzy instrumental showcase for the entire band but really highlights the interplay between Cummings and Vivino as they tangle with competing guitar riffs. Top notch from beginning to end this disc should serve as an object lesson to the pampered pop stars and even rockers who spend months in the studio to get the right drum sound and end up with discs only a quarter as powerful as this. SMITTY