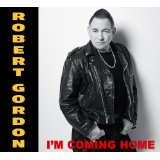 Rockabilly, punk, country, blues and roots rock are the stocks in trade for Robert Gordon. Influenced by Gene Vincent and Elvis he was laying down smoking hot rockabilly tracks while the Stray Cats were still working their way through middle-school. When he hit the scene in the late 70’s with Link Wray on guitar he made a big splash with cuts such as "Red Hot" and "Flying Saucer Rock N’ Roll" and even a take on the Springsteen penned "Fire" before it was co-opted and made a hit by the Pointer Sisters. In the years since he has refused to follow the yearly trends in modern music and has continued to focus on the 50’s as the source of his material if not in songs, at least in feel. As such, he has a devoted following amongst punk and rockabilly fans. This disc finds him moving away from the punk-energy groove of his earlier releases and opting instead for mostly mid-tempo rockers that wouldn’t be out of place on any number of early Johnny Cash discs both musically and vocally. The title track is a prime example: You can almost hear Cash’s "Get Rhythm" in both the groove and the vocal approach. He’s joined here by Marshall Crenshaw on guitar on a couple of cuts, "Walk Hard" (yes, the title track to the John C. Reilly/Jud Apatow movie) and "It’s Only Love", which has a great Buddy Holly groove. True to his roots, he covers everything from Albert Collin’s "Lucille" to Buck Owens’ "Under Your Spell" Again to Dale Hawkins’ "Heaven" and even a doo-wop infused "It’s Late". Gordon delivers these tunes with true conviction rather than the hipster irony that too often accompanies modern bands dipping into the past. Smitty