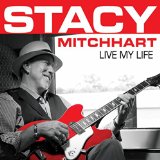 On his 12th disc, Stacy Mitchhart applies his rough hewn voice and sizzling guitar licks to several originals plus smoking covers of the Beatles’ "Come Together", Gill Scott-Heron’s "Legend In His Own Mind" and Bill Withers’" Better Off Dead". The originals include an homage to the brown nectar of the Gods, "I Drink Whiskey", a tribute to the woman who pulls all the right moves, "She Knows What To Do", and a call to join the party at the "Boogie Bar & BBQ". While blues is the main calling card here, Mitchhart also includes some soul grooves on the smoky "Voodoo Doll" and the buoyant instrumental "Soul Stroll". Many of the tracks get added spice compliments of horns and a B3 organ but "I’m the Reason (She Walks That Way)" takes things all the way into little big band territory with its jazzy charts and upbeat groove and "Legend In His Own Mind" is a slippery, horn driven delight. Mitchhart sets his normal guitar aside on a number of tracks including "Come Together", "Live My Life" and "Cat Bowl Blues" in favor of 3 and 4 string Cigar Box Guitars, from which he coaxes hard-edged slide blues, and in favor of a ukulele and dobro on the acoustic "Worried Mind Blues". Overall this is a stylistically diverse delight. Smitty