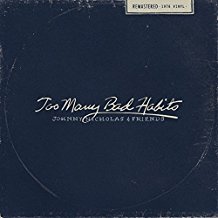 TOO MANY BAD HABITS

This two-disc set by guitarist/vocalist/songwriter Johnny Nicholas pairs his 1977 release Too Many Bad Habits with 12 unreleased tracks that date back to the early 1970’s when Ann Arbor, Michigan was the unlikely center of an emerging blues scenes by virtue of its Blues Festival. Nicholas played a major role in the attention paid to Ann Arbor as he teamed up at the festival and local clubs with the likes of Big Walter Horton, Boogie Woogie Red and Johnny Shines, amongst others. The original disc features not only Big Walter and Johnny Shines but also soon-to-be members of Asleep at the Wheel including Ray Benson, Lucky Oceans, Link Davis Jr. and Tony Garnier. The unreleased tracks focus the spotlight on Big Walter, Shines, Boogie Woogie Red and Nicholas. While the early 70’s is not all that long ago in the evolution of music, these discs are a major reminder of how quickly the intervening years found Rock, Soul, R &B and even Hip-Hop finding their ways into the blues. Conspicuously devoid of these added influences, these tracks are straight old-school blues with diversity coming from regional variations rather than different musical genres. Appalachian style acoustic/finger-picking blues exist alongside harmonica driven Chicago blues and acoustic guitar blues straight out of the delta. While he was considerably younger than Shines. Big Walter and Boogie Woogie Red, Nicholas more than made up for his lack of long experience with weathered vocals, spot-on work on both guitar and mandolin and a big batch of original tunes. Grab this disc, jump into a time machine and see what all the fuss was about as the blues took Ann Arbor by storm in the early 1970’s. Smitty