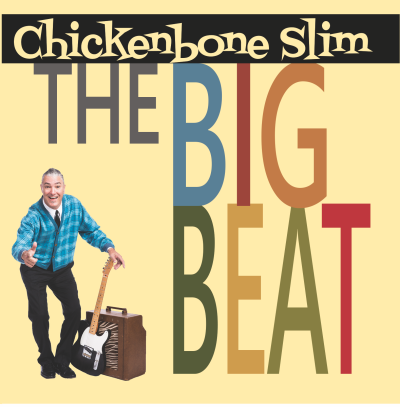 Larry Teves a/k/a Chickenbone Slim is a San Diego based guitarist and vocalist who has served in a journeyman role playing bass and guitar with the likes of Tomcat Courtney, Big Jon Atkinson and others. This, his second disc, is a creature of luck, having been recorded when the happy coincidence of time between gigs matched up with studio availability at Kid Andersen’s Greaseland. Taking advantage of the opportunity, Slim gathered up Big Jon, Marty Dodson on drums and Scot Smart on bass to work his way through the 9 self-penned tracks that make up this release. While blues makes up the bulk of the bill of fare with "Long Way Down" and "Long Legged Sweet Thing" leading the charge with slicing guitar and harmonica respectively, Slim also includes old-school country, "Hemi Dodge", and folk, "Vodka and Vicodin". Slim’s pedigree as a side-man shows through as he cedes the spotlight to Big Jon’s harmonica work on "Do You Like It?" and his nod to John Lee Hooker as the guy who gets him through the tough spots, "Me and Johnny Lee", before taking center stage back with some tasty guitar licks." Man Down" is the best showcase of his guitar skills as he adds six string urgency to his lyrics about the many ways a man can fall on bad times through little fault of his own. Slim’s vocals are workmanlike throughout but not unique of powerful enough to earn him many invitations as a guest vocalist for others. That said, while there is nothing ground-breaking here this disc should keep Slim on the front of the bandstand as a lead guitarist who can sing instead of in the shadows as a side-man. Smitty