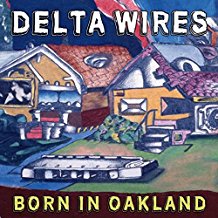 This seven-piece crew has been tearing up the West Coast blues scene for over 30 years. On this, their seventh disc, they showcase a number of original cuts and covers that take advantage of the horn-heavy, harmonica fueled line-up. "Fine and Healthy Thing" channels the Blues Brother’s classic take on" I Don’t Know" while "Vacation" recalls vintage Huey Lewis &the News with a charging harmonica lead and ruminations on escaping the daily grind and traffic jams to enjoy some well-deserved time off. The band shifts gears for a slow blues on "Your Eyes" where vocalist Ernie Pinata’s world weary vocals are accented by a dose of mournful trombone. The same low-key approach drives "Devil’s In My Headset" until some inspired saxophone and guitar soloing lifts the energy a couple of notches. Elsewhere, on "Fun Time" and "Days of the Week", the groove is considerably more upbeat with a mid-song guitar solo on the later cut celebrating good times with a new lady. "In the Middle" and "I Don’t Care" put the horn section closer to the center of the action than many of the cuts with the trumpet, saxophone and trombone roaring in unison on the later cut and the rest of the band laying down some hard edged-funk underneath punchy trumpet and sax solos on In the Middle. With a sound that leans closer to the funk of Tower of Power than the more traditional blues of Roomful of Blues this disc will nevertheless appeal to fans of horn driven blues. Smitty