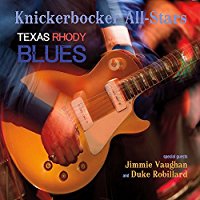 This third release by the Knickerbocker All-Stars celebrates the curious connection between the Rhode Island and Texas blues scenes in the 80’s and 90’s when various members of Rhode Island’s Roomful of Blues found their way into the Austin-based Fabulous Thunderbirds and Stevie Ray Vaughan brought the Roomful horns into his live show. Given the difference between the horn oriented jump blues of Roomful and the raw, guitar centric flavor of the Thunderbirds and Vaughan the match didn’t seem made in heaven, but like the peanut butter cup ad, the combination made each better. Featuring Jimmie Vaughan who held down the guitar slot in the Thunderbirds and Duke Robillard who founded Roomful and then stepped into Vaughan’s place when he went solo, this disc features the two trading riffs on Dave Bartholomew’s "Going to the Country", Roy Milton’s "I Have News For You" and Frank Patt’s "Blood Stains On the Wall". While the fireworks between the two are enough to commend a listen, it is the addition of the rest of the All-Stars that proves the point that the two styles work well together. The seasoned veterans who make up the All-Stars are virtually all alumni of Roomful and bring their considerable chops to this collection of tunes by the likes of Lowell Fulson, Clarence Gatemouth Brown, Guitar Slim and Ron Levy. Knowing just when to throw in the horns and keys, the crew adds the accents that separates the tunes from the countless guitar-focused covers. With Monster Mike Welch handling the guitar chores on the bulk of the disc with the flair that lead to his “Monster” moniker, a case could be made that he is deserving of the same “special guest” billing as Robillard and Vaughan. That small quibble aside, this disc has a lot to offer whether your taste runs towards horn-driven blues or guitar blues. SMITTY