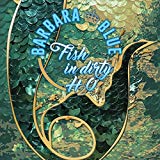 Barbara Blue is a long-time presence on the Memphis blues scene where she has held court five nights a week at Silky O’ Sullivan’s for over 21 years. Her vocal prowess and long tenure on the scene have earned her a brass note on the Beale Street Walk of Fame. This disc marks her eleventh release and showcases not only her vocals but her talents as a writer on several original tracks. She’s joined by Will McFarlane, Michael Tols, Johnny Lee Schell and Scott Sharrad on guitars, Bernard “Pretty” Purdie on drums, Dave Smith on bass, a horn section including Marc Franklin on trumpet, Jim Spake on baritone sax, Lonnie McMillan on tenor sax and Steve Graham on trombone and a bevy of back-up singers. Lots of musical territory is covered here with Blue working her way through gospel-tinged soul, "Dr. Jesus", straight blues shuffles, "Accidental Theft" and" Gravy Train", (the later of which features rollicking keyboards and big horn charts) blues with a hip-hop interlude featuring Al Kapone," Fish in Dirty H2O":, a funky take on Robert Johnson’s" Come On In My Kitchen", late-night weepers about leaving even though she’s no quitter," Walk Away", saucy (in more ways than one!) horn-driven rockers, "BBQ Man", and pulsating R & B," Wild Women". While many bands focus on dance-friendly party anthems, Blue isn’t afraid to trade in the dance floor for slow, heartfelt reflections on how you can rid yourself of mementos such as pictures or clothing of a lost lover but the memories take a long time to disappear,"Slow Burn". "Meet Me in Memphis" is an homage to her adopted home and showcases her ability to glide from a low growl to a near falsetto with a voice that drips emotion all the way. As she extols the many charms of the city the track could easily be fuel for an outreach to those that think of Memphis only in terms of Elvis. A solid set from beginning to end. Smitty