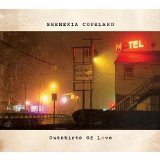 As the daughter of bluesman Johnny Copeland, Shemekia Copeland comes by her blues chops as naturally as most of us breathe. Now several discs into her career she isn’t afraid to stretch beyond the boogies and shuffles that mark safe territory for someone making a living in the genre. Instead of the tried and true safe path, she takes side trips into rock, "Outskirts of Love", folksy acoustic numbers, "Cardboard Box", country, "Drivin’ Out of Nashville", soul, "I Feel a Sin Coming On", gospel, "Lord, Help the Poor and Needy", and even blues fueled takes on classic rock with Z.Z. Top’s "Jesus Just Left Chicago" and CCR’s "Long As I See the Light". Straight blues makes an appearance on Albert King’s "Wrapped Up in Love Again". In addition to covering lots of musical territory, she also takes on a diverse array of topics including the temporary nature of every victory, "The Battle is Over (But the War Goes On)", the permanent nature of the fate that befalls the fool who messes with her," Drivin’ Out of Nashville", the consequences of a wild night out, "Crossbone Beach", and the fact that the "Devil’s Hand" lurks around every bad decision. While reviews of her live and recorded performances tend to refer to her as a force of nature for her powerful vocal delivery, she’s not just another blues shouter. Instead, as the years have passed by, she’s become more nuanced in her delivery and conveys power as much through her expert phrasing and use of her full dynamic range as she formerly accomplish with just her full throttle roar. Joined here by guests including Billy Gibbons of ZZ Top, Alvin Youngblood Hart, Robert Randolph and Will Kimbrough (who is seemingly playing with everyone these days) Copeland has assembled yet another thoroughly enjoyable release. SMITTY