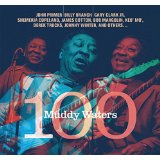 This disc marks the widely recognized 100th anniversary of Muddy Water’s birth. The lavish hardcover packaging and lengthy high gloss booklet with its detailed overview of Water’s career give an immediate clue to just how serious everyone associated with the project took getting it right. With a core group of musicians featuring alumni from his storied band including John Primer, Bob Margolin and James Cotton as well as other Chicago blues royalty such as Billy Branch, Matthew Skoller and Kenny “Beedy Eyes” Smith, the collection features cuts ranging from obscure nuggets taken from Alan Lomax’s field recordings at Stovall Plantation in 1941, "I Be’s Troubled", and 1942, "Why Don’t You Live So God Can Use You", to well known numbers such as "Got My Mojo Working", "I’m Ready" and "Mannish Boy". Along the way, a number of top flight guests join the fun including Shemekia Copeland on "Got My Mojo Working", Johnny Winter on "I’m Ready", Derek Trucks on "Still a Fool", Gary Clark Jr. on "Forty Days and Forty Nights" and Keb’ Mo’ on "Last Time I Fool Around With You". John Primer, who spent a good deal of his career alongside Waters and continues to carry the torch of electric Chicago Blues today, handles the vocals on this collection with a fine ear to the nuances of Muddy’s forceful yet swinging singing style. While he doesn’t have Muddy’s deep roar he has no trouble giving a convincing reading of everything included here. With cuts from throughout Muddy’s career there is everything from acoustic delta blues to his innovative electric blues that shaped almost every blues note to find its way through an amplifier ever since he formed his first Chicago band. While there is little here that you haven’t heard more times than you can count, there are some cool re-workings of classics (check out the funky, tape-loop driven "Mannish Boy") the enthusiasm and care that went into this collection will bring yet another smile to your face as you toast 100 years of blues greatness! SMITTY