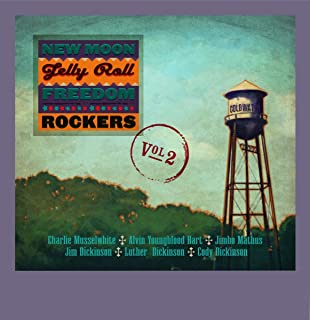 This second release by the spur of the moment assemblage of Luther, Cody and Jim Dickinson, Charlie Musselwhite, Jimbo Mathis and Alvin Youngblood Hart, mines the same loose, blues-drenched vein as Vol. 1 did just a few short months ago. Since these recordings have been on the shelf since their recording in 2007, the short turn-around is a welcome gift to fans of these “A” list musicians. The eleven cuts featured here include a couple of Musselwhite and Mathis originals plus covers by the likes of Doug Sahm, "She’s About a Mover", Jr. Wells, "Messin’ With the Kid", Jimmy Reed, "Can’t Stand to See You Go", and Earl Hooker, "Blue Guitar". Apart from Hart’s upbeat reading of "She’s About a Mover", most of the material simmers with a slow, low-key, intensity that belies the top-notch musicianship of the collective crew that emerges upon repeated listens. Musselwhite shines bright on harmonica throughout but especially on "Searchlight (Soon in the Morning)", "Messin’ With the Kid" and the swampy "Black Water". As on Vol. 1, Mathis skips the jump/swing of his Squirrel Nut Zipper days in favor of the hypnotic hill-country blues that find favor on not only his cuts, "Greens and Ham" and "Searchlight", but also on Hart’s "Millionaire Blues (If Blues Was Money)". Luther Dickinson is frugal with his lead on the stinging "Blue Guitar" where he lays down the groove as if he’s trying to stretch fifty bucks to buy something worth a hundred. The late Jim Dickinson gets the most time in the spotlight with four vocal leads and a chance to show his piano chops, particularly on Charles Mingus’ "Oh Lord, Don’t Let Them Drop That Atomic Bomb on Me". While his take on "Messin’ With the Kid" won’t have anyone deleting the original from their playlists it is worth a listen for the dueling guitar leads. Overall, this disc is a great soundtrack to a lazy afternoon on the porch watching the world go by while you debate between whisky and sweet tea as your beverage of the day. SMITTY