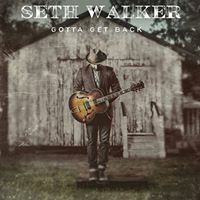 Another solid album by Seth Walker. There are a couple of tracks which sound very similar to albums past, but still has a fresh sound to it overall. Still has that bluesy feel to it, with a little bit of soul or R&B thrown in there as well. He always pours his heart into the music for sure, and this album is no different. I ended up listening to this one a few times as i could just not take it out of the player at the end of the day. I really liked tracks 1, 2, 11, and 8 the most, but there were quite a few great tracks at the end of the day.