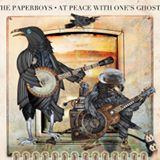 At Peace With Ones Ghosts

When you are putting this cd in, remember one thing music is supposed to be fun and versatile. If you can imagine a combination of some Irish Style tunes and mix in some country twang you get The Paperboys. I really don't any bad that i would compare this to, but at the end of the day it is a pretty solid album. Track 7 stands out by far and away as the best track, but tracks 3 and 4 are not too bad either. I enjoyed it