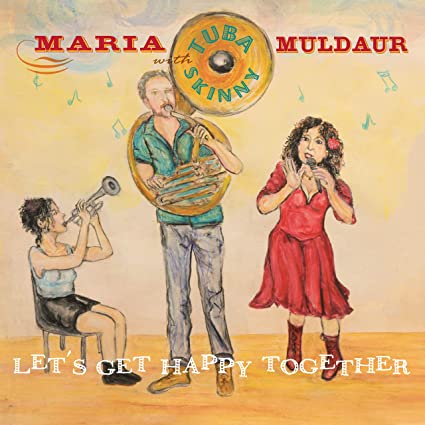 LET'S GET HAPPY TOGETHER

Fans of 20’s and 30’s jazz and blues that struggle with listening to scratchy 78’s will find much to love with this match between blues and roots temptress Maria Muldaur and the New Orleans based street band Tuba Skinny. While the band’s name implies a solo act, the reality is far different with eight musicians including a cornet, tuba, trombone, banjo, clarinet, two guitars and a washboard providing the swinging soundtrack to the 12 cuts collected here. The sound is vintage and so are the tunes with Muldaur and the band exploring songs first performed nearly a century ago. After 42 prior releases, Muldaur is the headliner here but she wisely lets the band shine equally bright with its buoyant instrumental interplay. Highlights include "Swing You Sinners", first popularized by Valaida Snow, known as “Little Louis” after Louis Armstrong recognized her as the “second best trumpet player”, the Irving Berlin classic "He Ain’t Got Rhythm" which features not only clever lyrics but a cutting contest of sorts amongst the band members, the geographic calling card, "Got the South in My Soul", which Muldaur clearly feels to her bones, and the long laundry list of things that go perfectly together but don’t stack up to her chosen one, "I Like Your Best of Al"l. With the exception a couple of near ballads, "Some Sweet Day" and "Road of Stone", and the mid-tempo "Big City Blues", that enable you to catch your breath and are a nice change of pace, this is high energy, fun, good-time music that is virtually impossible to resist for anyone that has the slightest interest in early American roots music including blues, jazz, jug band and Dixieland. Throughout, Muldaur’s voice and delivery matches the upbeat musical backdrop with an exuberance that never reveals the decades of age difference between herself and the band. Those that don’t know the difference will be excused from thinking everyone included on this fine recording is of the same vintage. The timeless songs performed in a timeless fashion have produced a gem of a disc. SMITTY