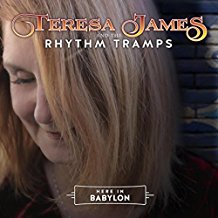 On their 10th disc Teresa James and the Rhythm Tramps deliver a wide-ranging tour of soul, blues and roots music. Led by singer/keyboardist Teresa James, the core band is joined by Mike Finnegan on B3 and the Texicali Horns on a number of tracks. The title track has a swampy groove that serves as a great set up for the following track," Give Me a Holler", which has a New Orleans funk feel and James’ invitation to spend some time with her commiserating about the trials and tribulations of everyday life. The band detours to Memphis for the soul/gospel of "Head Up, Heart Open" and then goes into torch ballad mode on "I Keep Drifting Away" and "Hold On". "Ground Zero" is a straight blues that revisits the Robert Johnson crossroads tale and features tasty guitar work by Billy Watts while "You Had to Bring That Up" has a slinky jazz groove that propels a tale of how revisiting history can wreck today’s good times. James puts her all into her ode to Greg Allman on "The Day the Blues Came to Call" where she recounts how profoundly his voice connected her to the blues the first time she heard it. The band really picks up steam on the last three cuts with the rocking "I Gotta Roll" which features some high energy piano work by James and punchy accents by the horns, the gospel rock of "21st Century Man" and on the Bo Diddley beat-driven party anthem "Find Me a Bar". With a voice and vocal style that recalls Bonnie Raitt and the strong support of the Rhythm Tramps behind her, James has added another fine disc to her credits. Smitty