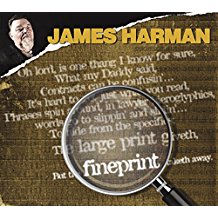 Harmonica master James Harman returns with another sideways look at life. The 13 tracks here are all originals and feature Harman singing and laying down greasy harmonica riffs over a rotating cast of musicians including Nathan James on guitar, Jeff Turmes on bass, Marty Dodson on percussion and Gene Taylor and Sonny Leyland on piano. The sound here it raw and loose without a lot of studio fussiness. In fact, many of the tracks were recorded live in the studio with Harman providing little more than his arms in the air for direction to the band. That said, there is nothing sloppy about this given the talent of the collected crew. Befitting the fact that the disc wasn’t recorded as a single piece but instead is assembled from numerous sessions in numerous places, there is a lot of territory covered here. "Fineprin"t is a boogie-laden homage to John Lee Hooker while" Come On and Dance With Me" has a south of the border flare. "At the Flophouse" and ""A Busy Man When This Old World Turns It’s Back On You are a slow-grinders that sandwich two different takes on the rhumba groove of "What ‘cha Gonna Do ‘Bout Me #1" (and #2!) where Harman outlines the trauma of hearing gossip about your woman’s gossip about your relationship. "Memory Foam Mattress" finds Harman pawning, junking and otherwise disposing of every reminder of his lady who left him for greener pastures. Nathan James’ guitar work is particularly tasty on this track. " Fruit of the Poisoned Tree" serves as a reminder that sometimes you need look no further than someone’s parents to know what to expect from a prospective mate." Familiarity Breeds Contempt but Absence Makes the Heart Grow Fonder" features ample doses of Sonny Leyland’s piano over a loping groove and Harman’s rumination on the built-in tension in relationships. "Glide" is a sinewy slice of blues suitable for late night cruising and "Ticket to The Circus" is an upbeat jump blues that serves as a nice change of pace to the mid-tempo material that makes up much of this collection. No need to read the fine print to understand this disc. It’s vintage Harman from start to finish. Smitty.