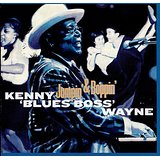 Kenny “Blues Boss” Wayne is a first rate keyboard player and vocalist who is now 10 discs into a solid career. Coming off from his 2015 award as “Most Outstanding Musician (Keyboards)” as awarded by Living Blues Magazine, Wayne has assembled 12 original tunes and one cover for this release which leans heavily on the upbeat jump blues and boogie- woogie stylings of the likes of Louis Jordan, Amos Milburn and Roy Brown. Accompanying Wayne for the ride are Duke Robillard and Charlie Jacobson on guitars, Russell Jackson (B.B. King) on bass, Joey DiMarco on drums, Sherman Doucette on harmonica and Dave Babcock on sax who get an early showcase on the instrumental track that kicks off this set, "Blues Boss Shuffle" and on the closer, "Boogie to Gloryland". The band typically employs a light touch that enhances the upbeat swing inherent in Wayne’s fleet fingers on the keys but is equally capable of jumping into Chuck Berry territory as on "Rock, Rock Little Girl" and laying down some straight blues as on the harmonica driven "I’m Coming Home". In addition to his skills on keys and vocals, where he sometimes echoes the late, great Charles Brown, "Back to Square One", Wayne also has a way with words as he resists all approaches to blackmail on "Blackmail Blues", laments his sorry financial state on "Bankrupted Blues", promises to clean up his act to gain the favor of his lady, "I Need Your Lovin’", leads the crowd to the dance floor, "Rock, Rock Little Girl", and tries to explain his way to a smooth exit that leaves the door open for his next visit, "Ciao, Ciao Baby". This is another solid effort from Wayne that should position him well for more well-deserved awards. SMITTY