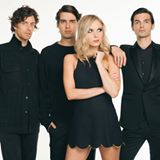 A little more mainstream. I thought they sounded like Madonna with a little bit more zing, so to speak. Her voice to me is a mirror image, and they add their own little twist by having multiple instruments involved. The whole cd really sounds like something out of the 80's for sure, even gives you that feel right from the start on track 1. I thought tracks 4, 5, and 2 were the best ones of the album. It's not too bad if you are looking for a blast from the past.