Artist of The Day: Shemekia Copeland 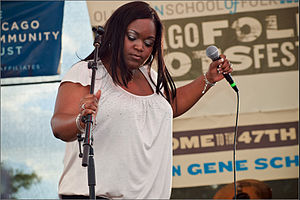 The daughter of renowned Texas blues guitarist Johnny Copeland, award-winning blues singer Shemekia Copeland began making a splash in her own right before she was even out of her teens. Projecting a maturity beyond her years, Copeland fashioned herself as a powerful, soul-inflected shouter in the tradition of Koko Taylor and Etta James, yet also proved capable of a subtler range of emotions.

In 2017, Copeland gave birth to a son and the following year, deeply inspired by the experience, she shifted artistic direction. She chose to record in Nashville and enlisted producer/guitarist Will Kimbrough -- who in turn enlisted a guest list that included John Prine, Mary Gauthier, Emmylou Harris, Steve Cropper, and more. With guidance from Kimbrough, Copeland dug deep and completed a deeply resonant program of soul, Americana, blues, and country. Entitled America's Child released August 3rd.