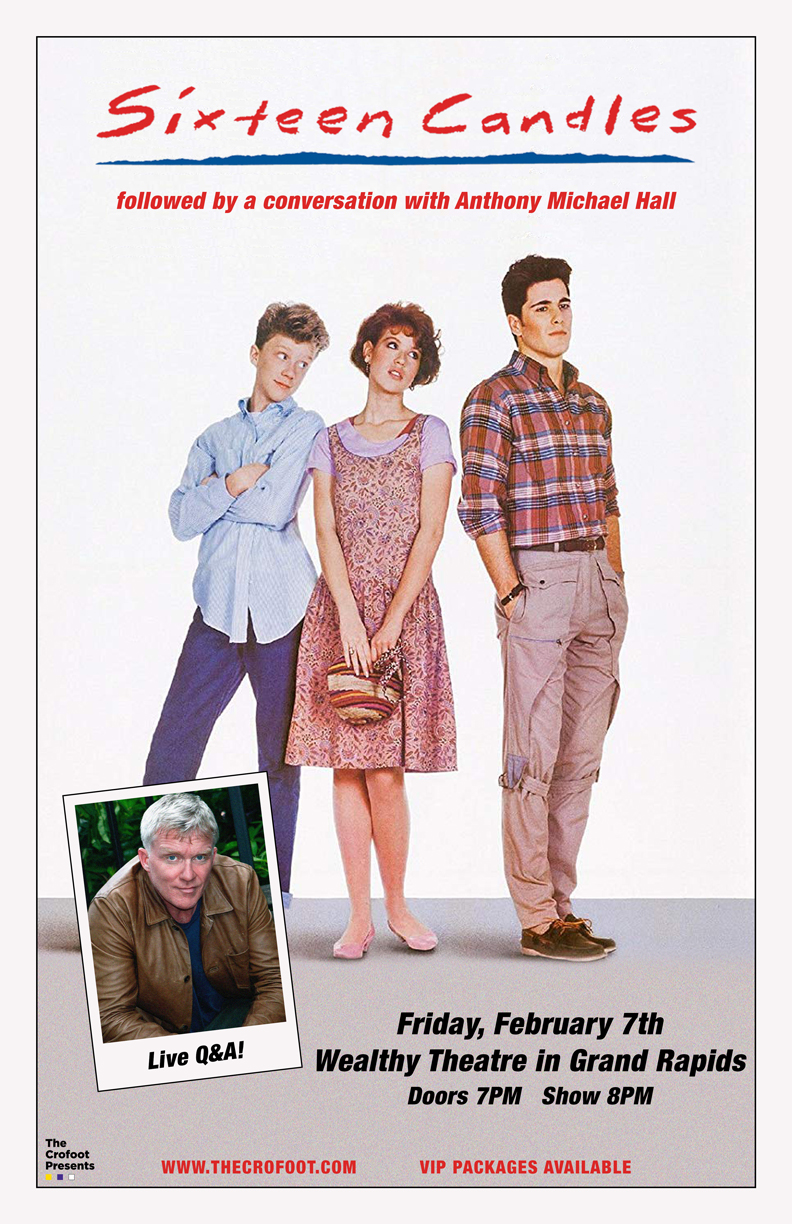 Tickets: https://www.ticketweb.com/event/sixteen-candles-a-conversation-the-wealthy-theatre-tickets/10049005?pl=crofoot
[Please note: Tickets are only available through TicketWeb]

As one of the Industry’s most iconic actors, ANTHONY MICHAEL HALL continues to work across a mix of acclaimed studio movies, independent films, and television, having collaborated over the years, with storytelling giants Harold Ramis, John Hughes, Christopher Nolan, Tim Burton, Ben Affleck, Brad Pitt, among others. Throughout his lifelong career, Hall has made it a point to challenge himself. Across a vast range of relatable characters to formidable Method actor who transforms to embody a role, Hall is consistently delivering performances that exceed audience expectations.

In his most recent performance, Hall is garnering acclaim and making headlines alongside Brad Pitt, Ben Kingsley, and Tilda Swinton in the Netflix Original Film, War Machine.  The provocative satirical comedy from writer/director David Michôd is produced by Pitt through his Plan B Productions and adapted from Michael Hastings' book The Operators.  Filmed pre-election, in the fall of 2015, Hall's character, Major General Glenn Pulver is based on now disgraced General Michael Flynn, who served in Afghanistan before he was President Donald Trump's former national security advisor.  Coming from a military family, it was critical to Hall that he honor the Hastings’ source material as well as his late grandfather, who fought in World War II, and his uncles who served the United States in Korea and Vietnam.

Born in Boston's West Roxbury neighborhood, the only son of blues-jazz cabaret singer Mercedes Hall, he was three-years-old, when his mother relocated them to the West Coast, before migrating back East to New York City in the 1970's, where she sang for their supper.  It was in New York where Hall’s exposure to performing and the arts, led him to his early work in commercials and eventually landed him his first important stage role at the age of eight. His first break came when he played a younger version of comedian Steve Allen in The Wake.

Hall’s first film, Six Pack (1982), didn't connect at the box office but his second movie ignited the lifelong career of one the most popular young actors of a generation that came of age in the 1980’s, when Hall starred in National Lampoon’s Vacation (1983) as Rusty Griswold, holding his own opposite the considerable comedic talents of Chevy Chase, playing his son.  Harold Ramis directed the movie, and John Hughes, who would soon go on to create some of Hall’s most memorable film characters, wrote its screenplay.

In the mid-1980s, Hughes and Hall created some of the most enduring portrayals of teen angst, starting with the teenage romantic comedy Sixteen Candles (1984), in which Hall played a girl-crazy geek chasing after Molly Ringwald’s character. Both Hall and Ringwald reunited with each other and with Hughes on the drama, The Breakfast Club (1985). Judd Nelson, Ally Sheedy, and Emilio Estevez filled out the cast with the five teens representing different parts of high school culture: the geek, the rich girl, the jock, the wacko, and the criminal. These stereotypes crumbled as they served in school detention together. Hall continued to play an overachiever with his next big role in Weird Science (1985).  All of the characters played by Hall in John Hughes' films were based on Hughes himself and his performance in these three films connected Hall's on-screen persona with the relatable geek archetype for an entire generation -- giving Hall ample opportunity to display his comic chops, while also touching on the relatable issue of adolescent sexual impulses.

Following his early film success, in 1985 at only 17-years-old with no sketch comedy experience, Hall became the youngest cast member of Saturday Night Live in the show's history - a record that he still holds.   After bonding with co-star Robert Downey Jr. on the set of Weird Science, the two young actors, now life-long friends, moved to New York together, and it was Hall who introduced Lorne Michaels to Downey, who also joined SNL’s cast for Season 11.

After a one-year run on SNL, Hall set out to explore diversified roles in films such as Out Of Bounds (1986) and Johnny Be Good (1988), followed by a physical metamorphosis, packing on muscle, for Tim Burton's Edward Scissorhands (1990), opposite Johnny Depp and Winona Ryder.  Next came critically acclaimed Six Degrees of Separation (1993), in which Hall portrayed a gay man who teaches down-and-out Will Smith to dupe rich people.

Hall completely transformed himself playing computer titan Bill Gates in the Emmy-nominated Pirates of Silicon Valley, followed by his role as Yankee's Hall of Fame southpaw pitcher Whitey Ford in the HBO film 61* (2001), where Hall wore his Yankee uniform number and logo backward and pitched right-handed, so the image could be flipped for the screen.

Hall had the starring role, and co-executive produced the USA Network series The Dead Zone, based on Stephen King's novel. During its six-season run, from 2002 to 2007, Hall portrayed a teacher who awakes from a coma to discover he has special powers. In addition to playing the lead, he served as a producer on the show, which was one of the highest-rated cable television series of its time.

In 2008, Hall was featured in Christopher Nolan’s The Dark Night (2008), appearing as Gotham City television reporter/anchor Mike Engel alongside Christine Bale, Heath Ledger, and Gary Oldman, followed by a recurring role on MTV’s Awkward.  Hall received considerable notice and accolades for his memorable role in the Academy Award-nominated film Foxcatcher (2014), in which he starred opposite Steve Carell before he played the role of the menacing Russian “kettle ball master” Grigory, alongside Guy Pearce, in the film Results (2015), a comedy about a team of personal trainers, which was followed the next year by a cameo Ben Affleck’s Live by Night (2016).

Upcoming Hall is developing a TV series with longtime friend and collaborator Robert Downey Jr. He also runs his production company Manhattan Films, which has various projects in development.