After 13 years with the Community Media Center, Non-Profit Outreach Coordinator Sister Barbara Hansen, OP retires from GRTV. Sr. Barbara was the host of NPO Showcase and Focus on Issues, highlighting the amazing work that non-profit organizations are doing in the Greater Grand Rapids community and bringing community leaders together to discuss important issues affecting the lives of citizens every day.

Songs From The Second Floor begin

The Songs From The Second Floor page is launched on the Rapidian, archiving videos of live performances from musicians in the WYCE studio

The CMC recieves funding to design and launch The Rapidian: a hyper local citizen journalism project.

Dirk Koning passes away at age 48

CAN is launched as an ISP for nonprofits; later to become GrandNet

GRCAC begins to do business as Community Media Center

The 1984 Cable Franchise Policy and Communications Act written by Senator Barry Goldwater, said, "A franchising authority ... may require as part of a cable operator's proposal for a franchise renewal ... that channel capacity be designated for public, educational, or governmental use." -- 47 USC § 531(a)[12][13](emph. added) This appeared to be a law which creates new rights, allowing local communities to require PEG channels, however, it in fact had the opposite effect. while the intent may have been to correct the omission which led to the Midwest Video decision, and make PEG mandatory, the result was a law which allowed the municipality to opt-out of PEG requirements, and keep 100% of the Cable television franchise fees for their general fund, while providing no PEG facilities or television channel capacity. Since 1984, many Public-access television centers have closed around the country as more municipalities take the opt-out provision.

GRTV opens in the lower level of the Ryerson Library

The Supreme Court explicitly rejected the notion that cable companies were "common carriers", meaning that all persons must be provided carriage. Instead, the Supreme Court took the stance that cable companies were private persons under the law with First Amendment to the United States Constitution rights, and that the requirement for Public-access television was in fact a burden on these free speech rights.

The 1972 Third Report and Order was amended in 1976 to require that cable systems in communities with 3,500 or more subscribers set aside up to 4 cable TV channels and provide access to equipment and studios for use by the public.

In United States v. Midwest Video Corp., 406 U.S. 649 (1972), the Supreme Court upheld the FCC's requirements for Local Origination facilities. It was determined that "In the light of the record in this case, there is substantial evidence that the rule, with its 3,500 standard and as it is applied under FCC guidelines for waiver on a showing of financial hardship, will promote the public interest within the meaning of the Communications Act of 1934"

in 1972, which required all cable systems in the top 100 U.S. television markets to offer three access-channels, one each for public, educational, and local government use.

In 1969, in the First Report and Order, the FCC stated, "no CATV system having 3,500 or more subscribers shall carry the signal of any television broadcast station unless the system also operates to a significant extent as a local outlet by cablecasting and has available facilities for local production and presentation of programs other than automated services." 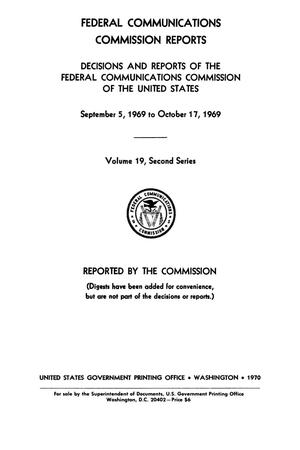