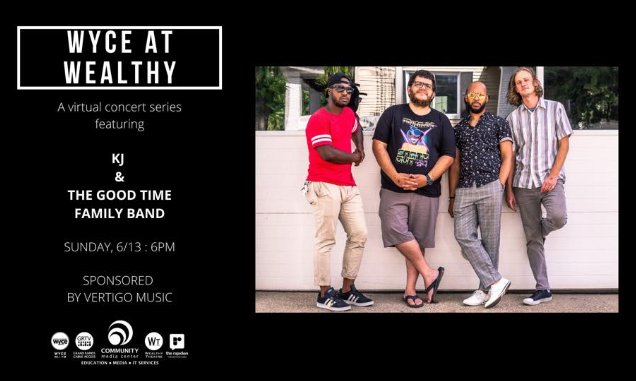 This month: KJ & The Good Time Family Band! Formed in the summer of 2015, KJ wanted to create a band that had the feel of one big family having fun on stage while playing a variety of upbeat genres, including, funk, soul, and rock. The bands influences include Funkadelic, Sly & The Family Stone, Jimi Hendrix, The Red Hot Chili Peppers, 311 and so much more. Carving out a unique slice of upbeat material that pays homage to classic funk music while putting their own distinctive spin on it. Their high-energy live performances and crowd interaction have quickly made them a local favorite.

CMC will also be taking online donations with a portion of the proceeds going to the artists or a local non-profit of their choosing. You can support via Venmo (@GRCMC) or on the website at: http://www.grcmc.org/donate

WYCE is an independent, commercial-free, community radio station serving the communities of Grand Rapids and West Michigan. Broadcasting on-air programming at 88.1fm, and reaching out to the world through online streaming. Dedicated to providing an eclectic blend of under-represented music. Listener-sponsored, volunteer-powered. http://www.wyce.org/​​

Video production powered by GRTV & Wealthy Theatre. Thank you to our volunteer camera-operators on this production! If you are interested in volunteering on future productions like this one, email us at: grtv@grcmc.org