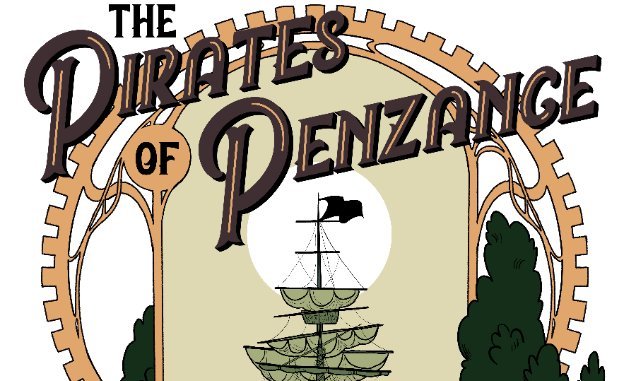 Gilbert and Sullivan’s The Pirates of Penzance is a rollicking, delightfully funny tale of a band of soft-tempered pirates. The handsome Frederic, who was mistakenly apprenticed to a band of pirates at the age of eight, is now twenty-one and, though quite fond of the group of joyous and fun-loving pirates, virtuously chooses to abandon his profession. Shortly after leaving them, he encounters a gaggle of beautiful maidens (one of whom, Mabel, steals his heart). The whole group has a run-in with the pirates themselves (as well as the girls’ father, the eccentric Major-General). Then, Frederic leads a band of cowardly policemen to take out the Pirate King and his men once and for all, but a secret is revealed about Frederic that will change his fate forever. Coming on the heels of their first international sensation H.M.S. Pinafore, Gilbert and Sullivan’s The Pirates of Penzance, or: The Slave of Duty is a delightful farce that is fun for all ages and beloved since its premiere in 1879.One of Gilbert & Sullivan's all-time classics brought to the stage (with live orchestra) by West Michigan Savoyards!

West Michigan Savoyards is a volunteer-driven community theatre group dedicated to presenting the works of Gilbert & Sullivan to a West Michigan audience. Through staged productions and beyond. WMS seeks to create a welcoming community that embraces all members with warmth, respect, and dignity. A yearly regular of the Wealthy Theatre stage for over a decade. Learn more at: http://www.westmichigansavoyards.org/

After ticket purchase, link for livestream will be sent via email directly, and content will be livestreamed come showtime on Saturday May 7th at 7:30pm Eastern!

Face masks not required. It's your living room, do as you wish!